Goodbye 2010s: The 10 makeup trends that defined this decade

Now that 2019 is coming to a close and 2020 looms around the corner, we thought we'd take you through the best and worst makeup trends we've seen this decade.

We can't talk about trends from this decade without bringing up the biggest catalyst in trendsetting this decade: Instagram. The social media platform birthed the phenomenon of the 'Instagram face' - we're talking bold contours, hyper-defined eyebrows and blinding highlight; basically the holy trinity of the Instagram makeup aesthetic.

Instagram makeup shot up in popularity when prolific celebs like the Kardashians and ubiquitous Instagram models popularised the ‘Insta-model' look. The look has been the subject of controversy since it's conception, often criticised for the fact that the prevalence of the trend has homogenised the look of every other person on the social media platform. Further criticism has come from minority groups, who claim that the style of makeup is damaging and perpetuates the notion that Caucasian features are the only standard of beauty. Regardless, the Instagram aesthetic has spurred a bunch of other trends that feature separately and together.

Ah yes, the decade of ‘fleek' (yikes - so glad we killed that word). In a cruel trick of fate, we decided to depart from the characteristic overplucked brows of the ‘90s and noughties and go in the exact opposite direction: full, big, defined brows. Although technically starting off as a subset of Instagram makeup as a trend, eyebrows have more or less grown to define this decade.

The ‘Cara Delevigne' effect of the 2010s threw big, full brows into the spotlight. Gone were the days of brow-neglect as per the noughties - now natural, full brows were in fashion and highly coveted by the masses. Those previously scorned and bullied for having naturally full and dark eyebrows were now highly revered and considered 'blessed', much to their confusion. Further, the need to get the now socially-prescribed 'perfect brows' for those who were not so blessed created a massive industry that has thrived throughout the decade, constantly reinventing itself and its services.

Treatments like microblading, tattooing, tinting, threading and tweezing are widely available and people gladly pay an arm and a leg to get the brows of their dreams; and why wouldn't they? Good brows are now a status and cultural symbol, and have solidified themselves as part of the daily routine of women worldwide. In fact, when surveyed, most women would gladly go makeup-free... barre the eyebrows, which must be shaped and primed to perfection.

The obsession with brows has spurred many... interesting online challenges with variable results. From Wavy brows, to Nike brows, to the Halo brow - we've seen a lot. The plethora of styles are as follows:

Basically, people got playful with their brows and ended up with some bizzare albeit very creative results!

This decade saw a huge boom in everything lip-related. Fillers, overlining, matte lip kits were everywhere and an array of stupid and dangerous 'online challenges' went viral; all in pursuit of a fuller pout. So how did the obsession start?

Well, to cut a long story short, Kylie Jenner posted a photo sporting a significantly plumper pout to Instagram in 2015. Initially attributing her new look to overlining and meticulously applied lip products, Jenner soon caved and admitted to getting lip fillers. Since then, Jenner has capitalised on the lip trend she created and used it to build her beauty empire, Kylie Cosmetics.

Unsurprisingly, her legions of fans have followed in her footsteps with facial fillers being the most popular cosmetic procedure worldwide and countless imitations of Kylie Lip Kits surfacing on the market. As a result, Kylie Jenner's lips have been the subject of controversy since their, um, *rise* to fame.

The apparently overwhelming need to emulate Jenner's lips took a turn for the worst with the Kylie Jenner Lip Challenge, which involved placing a shot glass or cap over the lips, sucking the air out to create a plumped pout. Unfortunately, this was predictably a very bad idea, with many who took part in the challenge complaining of swelling, pain and bruising. 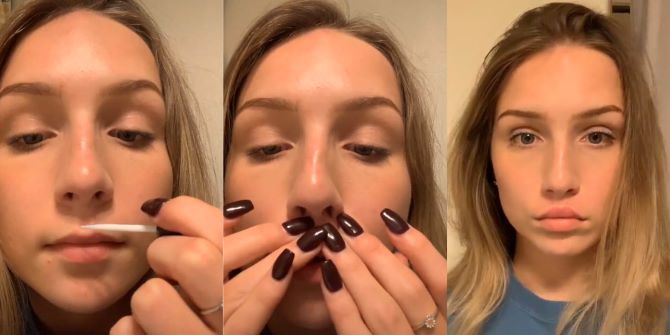 On the coattails of terrible challenges is the Glue Lip challenge, which started off on TikTok, which involves putting some glue on the philtrum and folding the lip up to create a fuller-looking top lip. Some opt for lash glue to complete the challenge, whereas others opt for super-glue. Lash glue = comical. The latter? Eek!

This trend deserves its own spot on the list - the news of Kylie Jenner's new luscious lips and the release of her cult favourite Kylie Lip Kits sent the masses into a frenzy, looking to recreate the look. Guaranteed, if you look anywhere like Colourpop, Fenty Beauty, Huda Beauty or the like, you will find some iteration of the matte lip in all its glory. Some argue that the trend is on its way out in favour of more hydrating formulas, but it stands that the matte lip shaped a large part of the beauty standards for this decade.

A subset of this trend was the rise in popularity of wacky, wild colours. Gone were the days of nude tones and classic red lips, in were the days of pastels, unconventially bright colours and deep, deep purples and blacks. Following the trend of dyed hair, many were getting more experimental with their look, and so birthed the craze for wild lip colours.

Contouring has been around for centuries, and can be traced back to the 1500s. Modern day contouring has come a long way since then and techniques are far more refined than ever, with the technique having shot up in popularity in this decade in particular.

You probably already know, but contouring is basically applying a colour that is one or two shades darker than the skin on areas like the hollows of the cheeks, the sides of the nose and under the jaw to create shadows that make the face appear slimmer. Often times it is complemented by a highlight that is typically one or two shades lighter than the skin tone in the high points of the face. Rooted deeply in the principles of drag makeup, contouring accentuates feminine features and softens masculine features. The trend went as far as to contour body parts, like the breasts, legs and abs.

Contouring is a staple of Instagram makeup, with many celebrities and influencers incorporating it into their makeup routines. For example, Kim K is the most prolific endorsement for contouring, having a makeup line dedicated towards the practise. Rihanna's Fenty Beauty line also sells contouring trios that allow you to recreate her chisled, flawless makeup. In fact, countouring has become so commonplace that pretty much any beauty brand you can think of offers some product exclusive to the technique.

Sadly, it's not as delicious as it sounds; baking is the application of a thick layer of translucent powder on the areas of the face that have been highlighted so that the makeup sets. Like contouring, baking also shares its roots in drag makeup and was similarly popularised by Kim Kardashian, with the subsequent countless Youtube and Instagram beauty vloggers further bringing the technique into the mainstream.

We really did love our highlight in the 2010s - from dewy finishes to dramatic strobes of rainbow, we have truly seen it all. As ever, Fenty Beauty was responsible for sending the trend into the high heavens, especially with the debut of the Killawatt Highlighters.

Another huge trend in the world of highlighter was glass skin, as seen on K-pop stars like the seven members of K-pop boy band BTS and Park Chanyeol of EXO fame. According to BTS, their flawless, unbelievably glowy skin was thanks to very comprehensive skin-care routines and a subtle hint of highlighters.

We also took subtle, dewy finishes and amped them up to holographic, hi-reflection, multi-coloured formulations - with some really stunning results. The drama of the highlight served to elevate the average Instagram picture to the next level.

On a more questionable note, the highlighter obsession spurred a few suspect online challenges, including doing a full face using only highlighter. Yes, it's a gag, but still - 2/10, would not recommend.

The cut crease took root in 2018 and was the perfect complement to Instagram makeup, adding drama and polish to a look. Originating from the days of silent films to make the eyes appear bigger and brighter, the cut crease is the application of a light colour over your lid and a darker shade on the lid crease. The modern version of the technique that developed in this decade is very polished, with the line of the cut crease being extremely sharp.

If you ask anyone with freckles, they'll probably tell you it's one of the features they were teased about the most as kids. So, you can imagine their surprise when all of a sudden freckles were considered to be high-fashion and highly coveted. In fact, freckles became so desirable that many tried to emulate them by using makeup, henna dye or just plain tattooing them on! 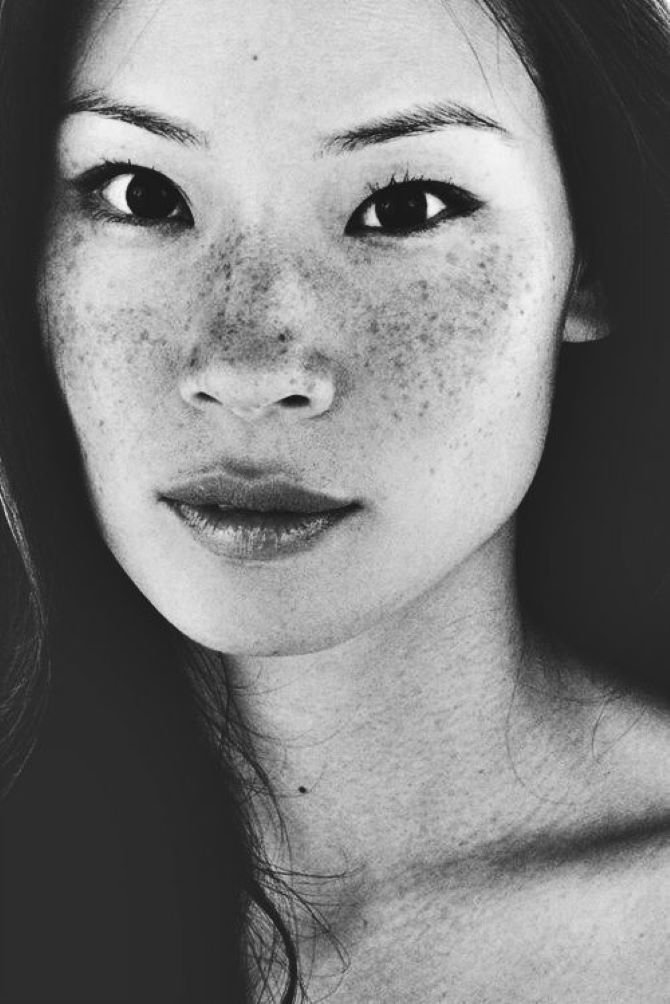 When done well, this trend was incredibly cute - unfortunately, successful attempts were few and far between. Exhibit A: Naomi Jon's attempt at semi-permanent henna freckles which went very, very wrong.

Exhibit B: The plethora of Instagram filters that allow you to fake freckles. Either way, neither option looks quite like the real thing.

So, maybe we should leave freckles to those who were born with them.

Full, fat lashes have always been a key part of every makeup routine, with mascara dating as far back as 3400 BC. Back then, mascara was made of kohl, crocodile dung, water and honey (oh dear). Thankfully, modern formulations are less crude and by no doubt much more effective. On top of mascara, we had falsies that come in all shapes and sizes as well as treatments like eyelash lifts and tints to see us through.

Most notably, though, incredibly ornate eyelashes such as the feather lashes from Valentino's SS19 show came into fashion in a really big way.