Mercedes-Benz's latest entry into the premium compact class in Malaysia fortifies its position yet again as the principal market leader. Trailing on the success of the new generation A-Class launched in March, the mid-sized segment welcomes a progressive new player, an exceptional style rebel—the new generation CLA.

Proportioned like a classic coupé with its high, stretched waistline, flat window surface and a long bonnet, it infiltrates the avantgarde through distinctively expressive lines accompanied by concave and convex surfaces, which tease the light as a rebel would.

In celebration of the new launch and marking a momentous 130 years of innovation by the brand who pioneered the automotive industry, the biggest convoy of 130 vehicles flashing its world-renown three-pointed star, travelled and converged at the buzzing Urban Hunting destination—Ultra Singapore. The roadtrip culminated in a never-before seen line up of over a hundred cars traversing the roads from Kuala Lumpur to Singapore and arriving at an event befitting the rock star nature and entrance of Mercedes-Benz's new generation CLA.

"The new generation CLA is irresistible. Its breathtakingly sporty proportions and edgy design gives this four-door coupé an unmistakable look, making this vehicle a dream desire for modern day customers. The CLA is the most exciting and only vehicle in its class. This four-door coupé is sure to steal the show wherever it goes." says Mark Raine, Vice President, Mercedes-Benz Malaysia. 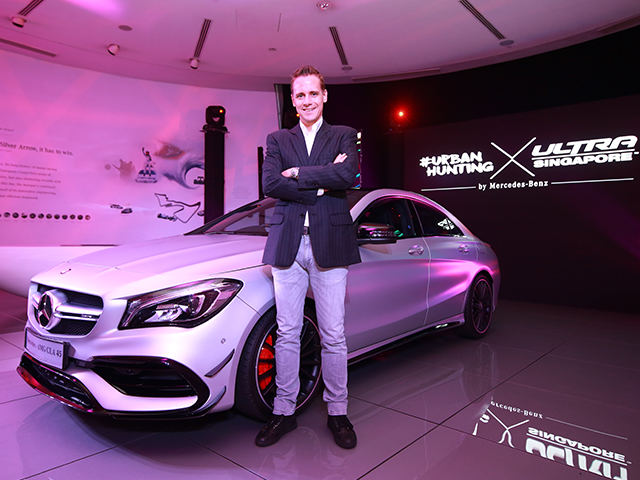 All variants of the new Mercedes CLA-Class are now decked out in AMG Line exteriors—cementing the sportiness and exclusivity of the vehicle. A diamond radiator grille in chrome pins fronts the show while the chrome trim strip on the new front bumper and elegantly flushed tailpipe trim panels add visual width and is testament to the superior AMG bodystyling. The lowered sports suspension makes for better handling and a more pleasurable drive.

A look into the cabin reaffirms the dynamic interior character of the refreshed CLA. Perched above the cockpit-style round air vents is a svelte freestanding eight-inch media display with new-style glass cover. The updated dials ease instrument readings and lashings of chrome complement the sporty upholstery with a striking finishing touch of red topstitching.

The Mercedes-AMG CLA 45 4MATIC Coupé proves to be amongst the most powerful in its segment. With a peak performance of 280kW and maximum torque of 475 Nm, it executes a 0-100km/h procedure in a mere 4.2. The powerful engine alongside improved aerodynamics owing to the new AMG front apron in an A-wing design with front splitter inserts and aero-flicks, this beast cuts through drag like a knife through melted butter—truly driving home its motto of "Avantgarde meets driving performance".