Kitchen Stories explores how our moods and emotions affects the way we eat and cook. The book consists of a compilation of 20 chapters that explores a different mood or emotion. Each recipe is styled and photographed to convey a mood and in each chapter the authors share a personal memory with the readers that inspired the inclusion of the particular emotion.

Elodie is a French food stylist, photographer and writer who graduated with a Masters in Culinary Arts in London. She has always been a food enthusiast and had started baking since she was 5 years old. Denise is a Malaysian pastry cook, freelance food writer and self-taught photographer who received a defer in patisserie from Le Cordon Bleu Orlando. She has worked in various food establishments from Orlando to Santa Monica, and is currently working as a pastry cook in Singapore.

Coming from very different backgrounds, their paths crossed on social media and their love for food inspired their collaboration that led to creation of this beautifully photographed cookbook. 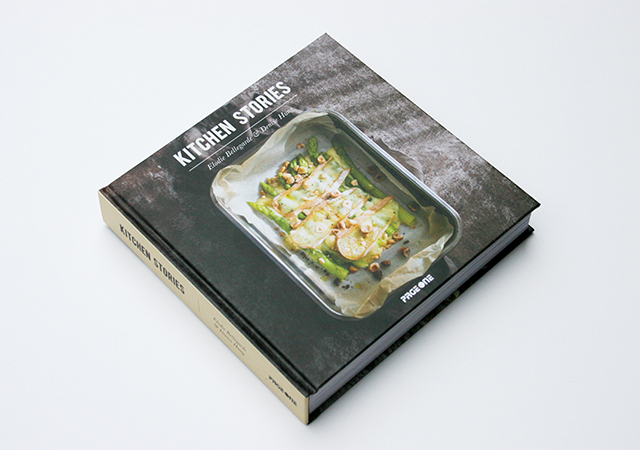 How did you guys meet?

Denise: I think we should really find out how we met. I think we always know that we met on Instagram but we don’t remember how.

Elodie: We did because we both like food and we both upload pictures of our food on Instagram. And I think one day, Denise tagged the place that you were in and it was in Singapore. So, I messaged her and said that I was in Singapore as well. We really liked each other’s photos for a while so we thought, “Let’s just meet up.”

Where did the idea of writing a cookbook come from?

Elodie: The story was, I kind of cook based on my mood. You know, sometimes I feel like eating this or don’t feel like eating that. And so one day, my husband asked me to try and write a book about the connection I have with food. I thought that that was not a bad idea, if possible. So, based on that, I asked Denise to try writing one with me because we share the same approach to food, which is very much connected to our moods and emotions. The idea was to just start small with just a couple of stories and approach magazines just to see if they would be interested. But it actually went from “let’s write a book” to “oh, we found a publisher!”.

What was the most memorable part of writing this cookbook?

Elodie: I think for me, it was to actually see the book.

Denise: Yeah, to actually hold it.

Elodie: Because we put so much work into it that it just felt like it was real. I mean, we spent so much time, so much effort into it.

Denise: We couldn’t stop hugging each other. I think I was almost in tears.

Elodie: It was really incredible to have something tangible that you could hold.

What was the most difficult part of writing this cookbook?

Elodie: For me, it was the photographs. Towards the end, my creative juices were running out.

The book was written based on different moods and emotions. What is your favourite emotion to be in when you cook or eat?

Denise: I think perhaps, ’Sentimental’ is one of my favourites because we travel a lot. I travel a lot. Up until the last two years, I used to travel a lot. We’ve been to different countries to work or study and you just want to feel at home sometimes but it’s just hard to get the ingredients. So that mood really resonates to our hearts.

Elodie: For me, maybe ‘Love’. I have a son and I’m trying to show him that food is more than just something you eat to sustain. I hope that he gets that love for cooking and eating.

If you could xplain the journey of writing this cookbook in one emotion, it would be..

Denise: I would say, exhilarating.

Elodie: Yeah, I think exhilarating is a good one.

How did you make your very different backgrounds complement each other?

Denise: I think fundamentally, we’re the same soul. We’re both very family-oriented, we’re both very close to our parents, we love cooking at home, we surround ourselves with food, and we also eat the same way.

Elodie: And we’re quite feminist.

Denise: Yeah, we’re quite feminist people. We eat the same way — we like light food, we don’t like food that’s too heavy, we have a sweet tooth, and we really pay attention to our ingredients, which is very important for us. We don’t go somewhere and just get something generic because it translates into the food and you can taste it. But at the end of the day, it’s not just the way it tastes but where it came from. Is it organic? Is it environmentally friendly? Those things are very important to us. So, we’re very aware of what goes into our food. I think, fundamentally we are the same and whatever differences that comes along the way in our recipes, we are happy to try it out.

Elodie: People are different and although we get along very well with each other, we don’t have to be exactly the same either. But for us food is what brings us together. We don’t really go shopping a lot or spend money on makeup or clothes, but we will spend a lot on food and ingredients. Not so much on dining out, but dining in — we spend a lot on cooking.

What is an ingredient you can’t live without?

What do you want your readers to take away from this book?

Elodie: That good food doesn’t necessarily mean expensive ingredients and that cooking is an easy process — you don’t need to have any fancy utensils or a big kitchen.  You can have a tiny kitchen and three ingredients, and you can have a meal. You know, sometimes people think that they don’t have time to cook because they have to work. It’s true, when you work, you don’t always have time to cook but it doesn’t have to be something fancy. You can make a very simple pasta bowl with pesto made over the weekend that can last you the week. I think sometimes people are hesitant to cook because they don’t have the right ingredients but it doesn’t have to be that way, you can be spontaneous.

Denise: We want people to talk about their moods and how they feel about the food that they cook. Not so much as what they are picky about but just being more aware of the ingredients that they use, what they put in their body. People nowadays just eat to get by and they don’t know what goes in their bodies — they just consume to consume. And I think that with the knowledge that we have, we should have awareness. Or else, we are just going to be faced with all these disease if we’re not aware. That’s why we try to encourage healthy eating and using organic ingredients.