Every year, Victoria's Secret will have its one-of-a-kind lingerie show featuring A-list performers and supermodels in intricately designed looks, and one thing's for sure: it has definitely become a global phenomenon. As announced few months back, the whole crew will be staging its 2017 show in Shanghai this year after checking off cities such as Miami, London and Paris. Aside from Behati Prinsloo who is pregnant with her second child, all of the Victoria's Secret Angels walked down the runway to musical guests such as Harry Styles, Miguel and Chinese superstar Jane Zhang.

Here are some things to note before the show airs end of the month:

Fifty-five models walked the catwalk inside the Mercedez-Benz arena, including veteran VS Angels Adriana Lima, Lily Aldridge and Candice Swanepoel (who's back after giving birth to her first child last year). Alessandro Ambrosio was also in the show, but it was announced that she'll be taking the Victoria's Secret runway for the very last time. Supermodels aside, this year's runway also featured many new faces as well, with around 18 out of 57 models being newcomers. Some of our favourites are Estelle Chen, Grace Bol and Frida Aasen.

As usual, the show is divided into different segments, and this year's are: Punk Angel (that gives you a sneak peek on their upcoming collaboration with Balmain; (Greek) Goddesses; Millennial Nation (with cropped hoodies, sweatpants and sock boots); Winter's Tale (in primary white and blue hues); Porcelain Angel and Nomadic Angels (where models donned rainbow coloured feathers and beaded jewellery). Brazilion model Lais Riberio was chosen to wear the 300-carat Champagne Nights Fantasy Bra this year, and with 6,000 gemstones including diamonds, yellow sapphires and blue topaz, her look is no doubt one of the most show-stopping ensembles of the night.

Musical guests include Harry Styles, Leslie Odom Jr., Miguel and Jane Zhang were tasked to perform their hits at the show while models strutted down the catwalk. In particular, Harry Styles sang a very befitting song during his performance, which is his latest single Only Angel. Click here for more details on the performances of the night. 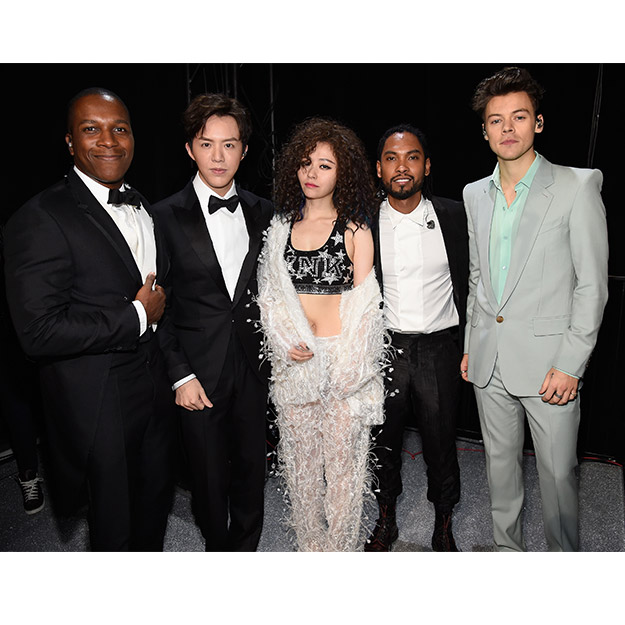 This year's show is no doubt one of the most drama-filled events ever—its first show in China has been met with different problems since the start. Scheduled to be walking and performing in the event respectively, Gigi Hadid and Katy Perry had to pull out from the show last minute, as it was rumoured that they were denied visas due to certain controversies in the past. But one of the most talked about happenings during the show? Ming Xi who made an unfortunate tumble as she slipped on her cape during her walk, and is helped to her feet by fellow model Bruna Lirio. That's not it—its after-party at the neighbouring building post-show was ordered to shut down by the police just after midnight.

The Victoria's Secret Fashion Show will be aired on the 28th of November.