Fashion buzz: Millie Bobby Brown is the new face of Pandora, Dior opens a pop-up at Harrods, and more

Millie Bobby Brown is the new face of Pandora 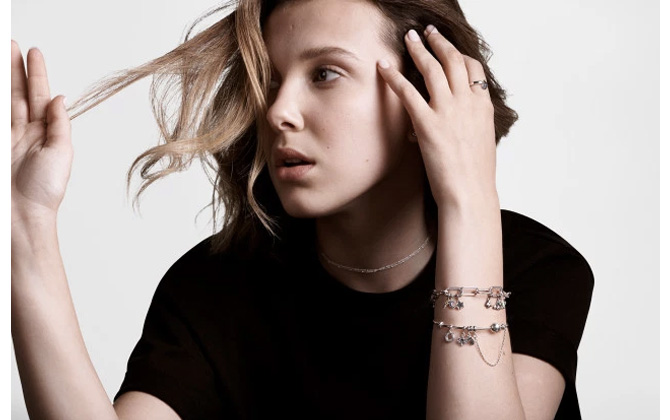 At just 15 years old, the young Miss Brown is named the latest brand ambassador to the jewellery brand, signing a 2-year contract, and is set to launch a collab collection this year. "I feel extremely honoured to be partnering with Pandora", said Brown in a press release from the brand. "I love Pandora because everyone can tell their own story, and each symbol can represent your individuality. We can't wait to see what Pandora and the budding British star have in store for us!

Rihanna switched up her regular Crop Over Carnival attire this year

Usually clad in a diamante-encrusted bikini for the yearly Crop Over carnival in her home of Barbados, Rihanna switched things up this year in a hot pink marabou-feathered frock by Dutch designer David Laport for a fashionable shake-up. She did not pass up on the jewels entirely though. Sparkles were seen on her toes with lace-up pointed pumps. The finishing touch? Tinted oval frames embellished in rhinestones. Shine bright like a diamond, Riri!

In conjunction with the launch of Dior's Autumn/Winter 2019 collection, the heritage brand works with a fellow household name when it comes to luxury department stores for this exclusive pop-up. Open until 31 August 2019, the store decor is inspired by the AW 2019 show which proudly celebrates British culture. Plastered with bright gingham checks, the store is also decorated with London icons such as the telephone booth and English taxicab for added British flair. The store houses a selection of ready-to-wear, footwear and bags from the AW 2019 collection; with the standout item being the trendy Dior Book Tote with an exclusive Union Jack motif. Also at the store, the unique ABCDiorcustomisation service to personalise your latest purchases.

Speaking of luxury and heritage department stores, Barney's New York, has officially filed for bankruptcy. The 96-year old retailer filed for Chapter 11 bankruptcy protection, and said in a statement that its position "has been dramatically impacted by the challenging retail environment and rent structures that are excessively high relative to market demand". Court documents show that the company owes nearly US$10 million in upaid rent, and has 2,300 employees on its payroll. The filing will allow the company to conduct a sale process, review their current leases and optimise their operations. Currently, they have secured US$75 million from affiliates of Hilco Global and the Gordon Brothers Group to help meet its financial commitments.

The online retailer has bought the brand platform New Guards Group for US$675 million, which holds the license for Virgil Abloh's streetwear brand along with Palm Angels and Heron Preston. "The addition of New Guards' brand platform brings a creative and industrial dimension to our suite of capabilities which, combined with our community of more than 650 boutiques, enables us to power and promote both new and existing creative names in the luxury industry to build the brands of the future", said CEO of Farfetch, José Neves. But what does this mean for fans of Off-White? The brand released a statement following the acquisition saying, "Off-White LLC, which is controlled by Virgil Abloh, owns the trademark of our brand, and New Guards Group is our exclusive licensee pursuant to a multi-year agreement. The New Guards Group transaction with Farfetch will not affect Off-White day to day operations as the New Guards Group team will become part of Farfetch. We look forward to our ongoing work together." It appears loyal fans of Off-White have nothing to worry about, as the change in management will not get in the way of Off-White's brand direction.

So we have this theory that Queen Bey can literally pull off any colour. If you saw her ‘Spirit' music video, you'll notice that she can rock even the most challenging hues (...like chartreuse? What even, man). This week on Instagram, she added a deeper shade of purple into the mix with a tone-on-tone ensemble. She wore a lilac chequered dress from Altuzarra which featured a wrap-style skirt and thigh-high slit, and accessorised with a purple croc-embossed cuboidal box bag from L'Afshar. What a look!

All of the stunning outfits from Beyoncé's 'Spirit' music video