Two months before the start of the Rio Olympic Games, the fashion set descended on the city of Rio de Janeiro, specifically the futuristic, UFO-shaped building that is the Niteroi Contemporary Art Museum. Sat atop a cliff, overlooking Guanabara Bay, with views of the Sugarloaf Mountain, the three-storey, Oscar Niemeyer-designed landmark building was Nicolas Ghesquière's choice of location of Louis Vuitton's Cruise 2017 show.

In the shadow of the conical-shaped building, Catherine Deneuve sat alongside Louis Vuitton campaign faces Alicia Vikander and Jaden Smith, on colourful mismatched seats made of plywood, glass and perforated steel, which set designer, Es Devlin, created as a response to the Carioca spirit of gambiarra, 'the art of transforming the available into the essential'. 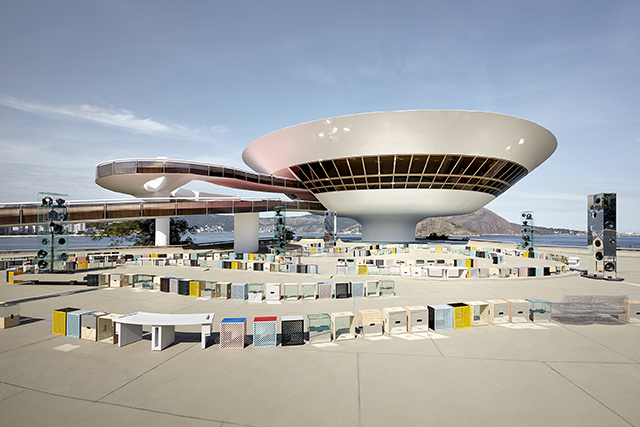 The show opened with Mica Arganaraz in a streamlined, sportswear-inspired dress, with cutouts along the upper arm and midriff, and an asymmetric hemline. Flat, rubberised thongs with straps that wrapped around the ankle allowed for ease of movement—a sporty nod to the Summer Olympics that would take place 68 days later. 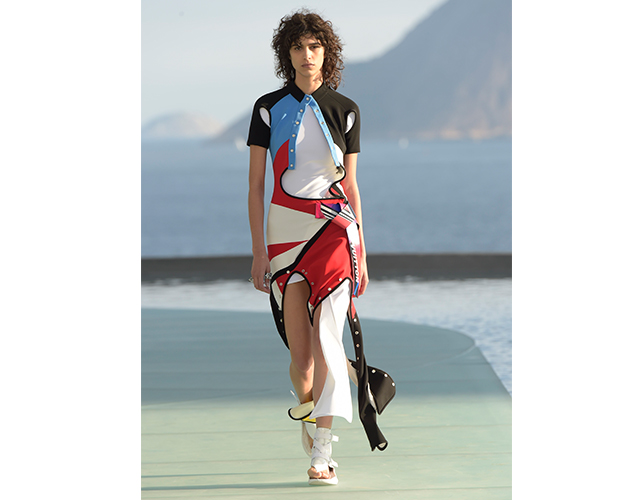 For Louis Vuitton's Cruise 2017 collection, Nicolas Ghesquière was primarily inspired by two major Brazilian artists: Helio Oiticica, pioneer of the Neo-Concrete movement and an explorer of space through painting, and Aldemir Martins, known for his work that depicts local flora and fauna, and whose famous painting 'A Fera' (1969) celebrates Brazilian football player Pelé. It was from the latter's work that Ghesquière incorporated football player prints onto ruffled minidresses and the Twist bag.

Literal sporting references aside, the collection also saw the maison's Damier check taking on a racing vibe, kite-shaped paper-thin leather dresses, inspired by Oiticica that allowed for freedom of movement, and colour-blocked windbreakers worn over basketball shorts with the house's monogram running down either side. Personal favourites include the ruched minidresses made of parachute material, worn over A-line dresses, or worn with long, lean trousers and more of the aforementioned basketball shorts, and the ruffled minidresses with cutouts that exposed the midriff. 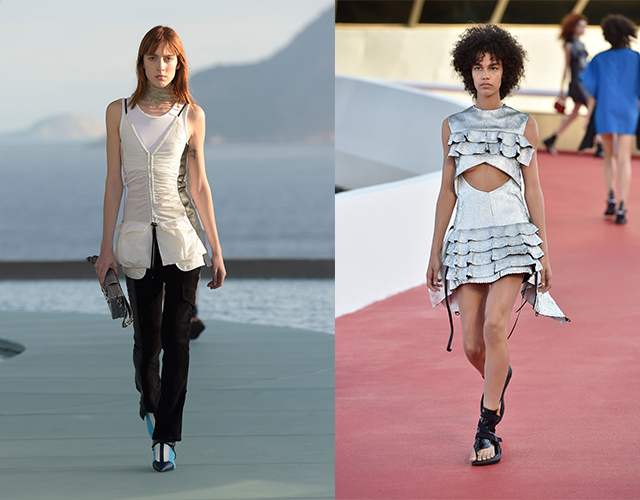 "In Rio de Janeiro, what I saw most of all was movement and an explosive energy that lives somewhere between modernism and tropicality," says Ghesquière. "I was fascinated by the constant duality between nature and urbanism and the pictorial explosion it creates. The main question was how to incorporate into my collection all these elements that are part of Brazilian culture, without forgetting that I am just a visitor who brings his own Parisian and French cultural references to the moment."

Post-show, frow-ers raved about the collection - Alessandra Ambrosio had her eye on the '80s boombox bag (complete with Bluetooth), while Jaden Smith had his on the tech-thongs. But it was perhaps Isabeli Fontana who captured the mood of the show best: "For me its art in clothes, because it's colourful, it's beautiful, it's happy and it's super strong. What caught my attention were the asymmetric dresses; short and long at the same time. (And the location) like you are in the middle of the ocean with the beautiful monuments. It can't get better than that."

See all the looks from the collection here

Our favourite Cruise 2017 looks for a perfect getaway

What to wear while basking in the heat of Rio