16/07/12 11:30
Here are some of the heavyweights who showed off their technical prowess during Haute Couture Autumn/Winter 2016 week

The backdrop of the show in the Grand Palais set tongues wagging, as per every Chanel show. Instead of a grand spectacle (Havana can't come close to this), Karl Lagerfeld thought it fitting that the audience should witness how the handmade pieces were made by the respectable staff of the atelier. Amidst the seamstresses working with their sewing machines, fabrics and cutting tables, models walked past clad in tweed suits and intricately embroidered dresses. A standout was the shoulders—bold and squared with sharp angles (sans padding) that gave a new silhouette to its iconic jackets, and was also complemented with cropped wide-legged pants paired with kitten-heel suede boots. Of course, no couture collection is really complete without one or two impeccable gowns, so Lagerfeld gave us breathtaking ruby and emerald stone embroidered dresses made for glamorous red carpet entrances, naturally. 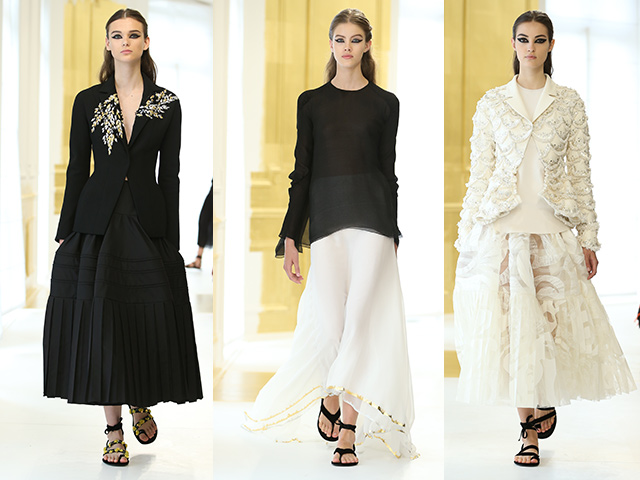 With the maison's iconic 1947 Bar jacket as the main inspiration, Dior's Haute Couture offerings were (pleasantly) more wearable than red-carpet fanciful. Interim designers Lucie Meier and Serge Ruffieux went with a palette of black and white with sprinkles of gold that gave it the elevated touch that it needed. Full skirts, taffeta dresses, and pleated hemlines were the bulk of it—despite the well-tailored jackets, the collection evoked a casual tenor without the frou-frou of couture confections we longed for. Is it obvious that we can't wait for Maria Grazia Chiuri's first collection for the house? 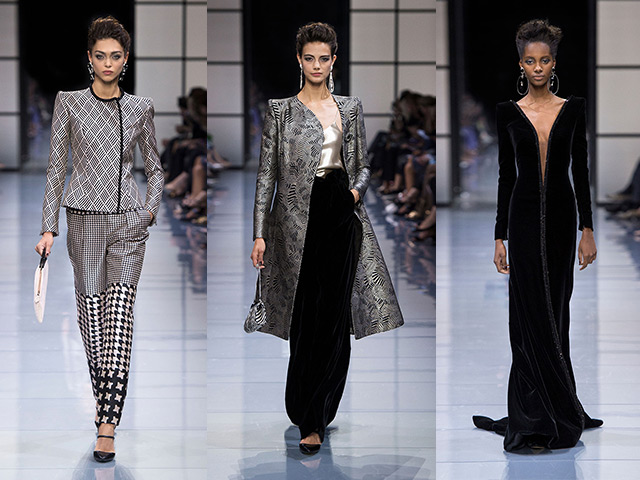 Giorgio Armani made use of velvet, harem pants, and Swarovski crystals for his couture collection this fall. While all three elements sound like it would have fared better separately, there were instances that had us giving double takes, including a full-on velvet pantsuit with a crystal knot detailing on the shoulders. Houndstooth print was a key motif at the beginning, translating to outerwear and even satin-like pants, but it was the final few midnight black velvet gowns with dangerously plunging necklines that stood out for us. 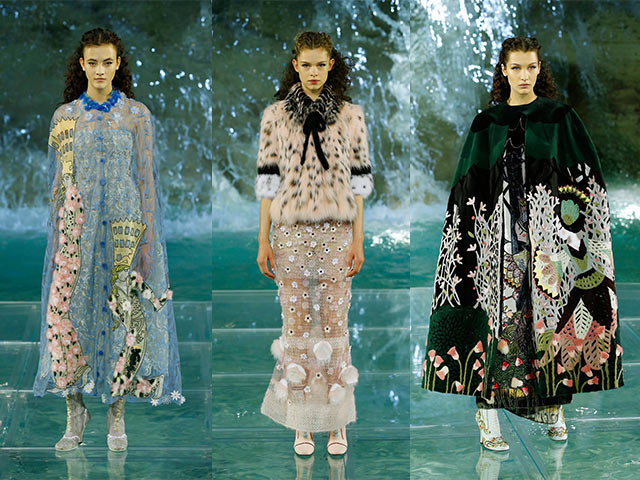 Fendi went with the bold and the beautiful for its 90th anniversary and to celebrate the restoration of Trevi Fountain in Rome. Guests including Kate Hudson, Maria Grazia Chiuri and Pierpaolo Piccioli graced the show that was a grand affair indeed—a clear runway was set up over the waters for models to sashay across, clad in stunning looks that evidently showed off the atelier's impeccable workmanship and technique on all the fourrure one can dream of. Inspired by a Danish book of fairytales from 1914, Karl Lagerfeld built the collection based on wondrous illustrations, with magical characters such as princesses, flora and fauna taking centre stage. Outstanding masterpieces include a coat made from small individual pieces of mink that took 1,200 hours to construct, and a long fur-lace dress that, upon closer look, you'd spot the 5,000 intricate hand-cut holes scattered across—absolutely enchanting. 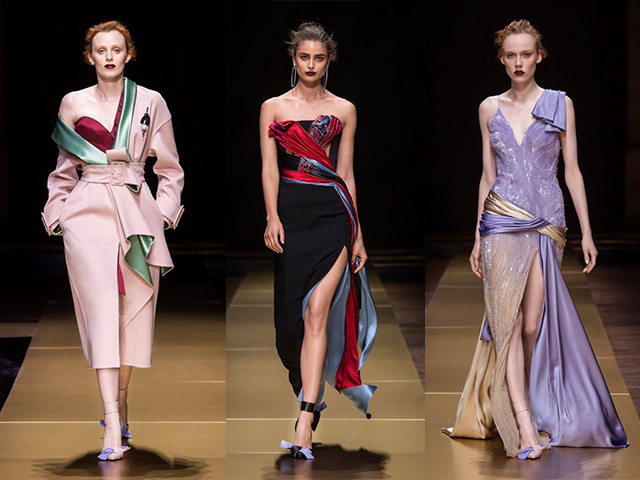 Donatella Versace gave us a handful of unpredictable looks that teetered the line between sexy and stunningly chic, which is a fresh breath of air as the house's signature has always been about the daringly risqué. Draping was on her mind this season, coupled with intriguing colour combinations that worked beautifully. Veteran supermodel Karen Elson opened the show, dressed in a cold-shoulder blush pink coat with a mint green back and a burgundy-hued bustier that peeked out sensually. Her lineup of coats were exceptional to say the least, along with an array of gowns that incorporated various cuts of fabrics made for an elaborate red carpet outing . 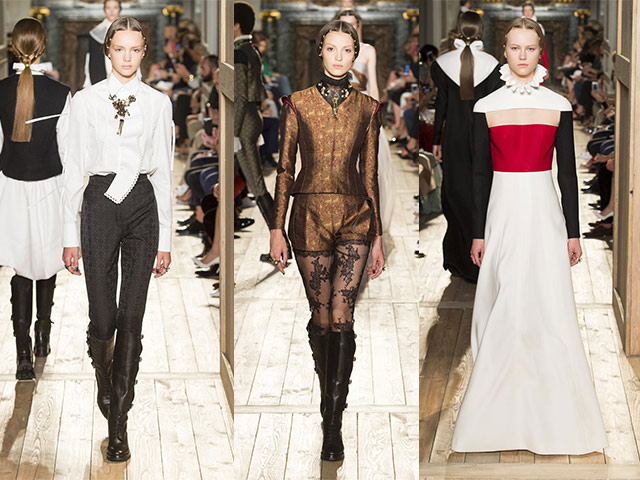 If the poeticism of puffed sleeves, robes, and high white ruffs in Valentino's couture collection doesn't convince you of Shakespearean inclinations, we don't know what will. Pierpaolo Piccioli and Maria Grazia Chiuri took an Elizabethan stance this time around, giving us costumey but charming looks that transitioned from ruff-collared shirts paired with black pants and jacquard ensembles to gowns made from delicate chiffon and red, black and white graphic wool. This collection also marks the last for Chiuri as she heads off to Dior, but we're excited to see how both solo creative directors fare for their next chapters.

La via di San Gregorio has been interpreted on a beautiful piece of garment, tailoring in forms of coat. Dolce&Gabbana Alta Moda. #DGLovesNaples photo by @fashiontomax

In celebration of Italian film star Sophia Loren (who also became honorary citizen of Naples a day after), Domenico Dolce and Stefano Gabbana threw the most elaborate ceremony befitting of royalty for their Alta Moda collection in the heart of Naples. As Loren sat upon her gilded throne made of velvet, 99 models made their way down the street, showing off the usual heavily embroidered and richly appliquéd looks that were very much in line with the house's aesthetic. Sizeable headdresses made of satin bows and flowers accompanied every look, while full floral skirts and jaw-dropping brocade capes were some stunners from the collection.

How to: Get bold graphic eyes spotted at Dior Haute Couture AW16