I first took notice of Saoirse Ronan in 2007 in the film adaption of Atonement. She was a young actress, still breaking it into the movie scene and the film adaptation of the novel by Ian McEwan marked her third cinema credit. Her youth did not hinder the depth of her portrayal of Briony Tallis, and garnered her an Oscar nomination, and it was clear from then, this girl was going to be a star. Fun fact: Her co-star on the film, James McAvoy based one of his character's alters in Split on his memory of her. Her performance in films that followed were equally as powerful. Her chilling portrayal as a murder victim in The Lovely Bones, the precocious teenager in Lady Bird and the formidable historical figure Mary Queen of Scots.

Having three Academy Award nominations under her belt at just 25, the Irish actress doesn't just come with acting chops. Her style through the years has evolved beautifully and we've been keeping watch. Ronan's current stylist Elizabeth Saltzmann plays a huge part in the the young actress' fashion transformation. "She's the oldest, most wonderful soul that I've been fortunate enough to meet. I met her at 21 and she was far older than I was at 50 and wiser, smarter, and cooler", Saltzmann tells W Magazine.

Below, 10 of our favourite red carpet looks and reasons why she's high up on our fashion radar.

#1 She can pull off very difficult colourways 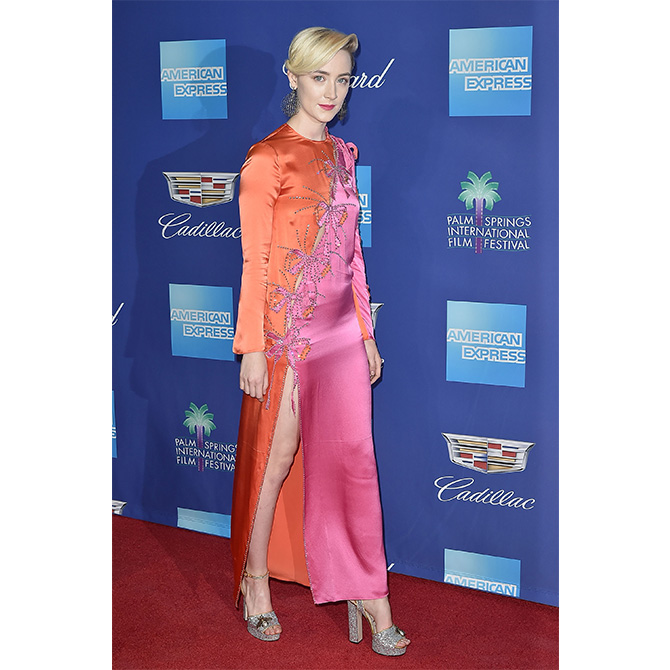 There are only a handful of blessed people who can pull of a two-toned pink and tangerine bejewelled number. This Gucci dress complements her skin tone perfectly. 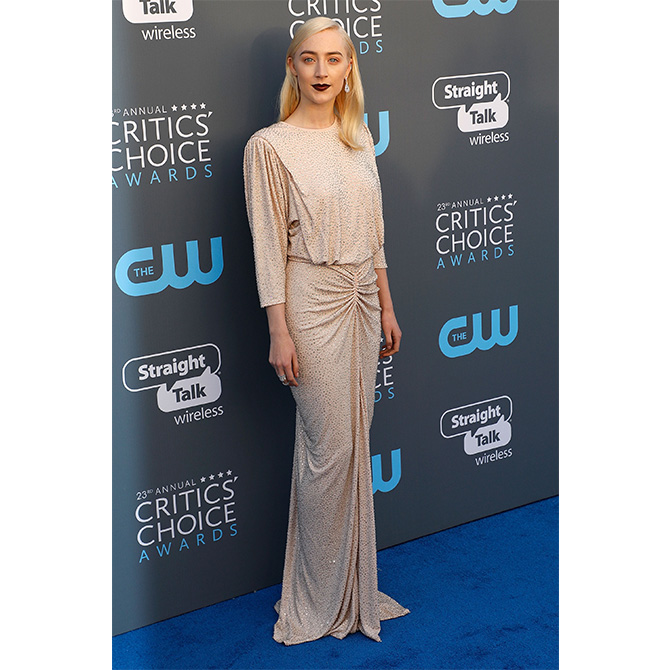 Saoirse balances the muted and understated shade in ice-cold diamonds and a bold red lip.

#3 She looks hella good in a suit 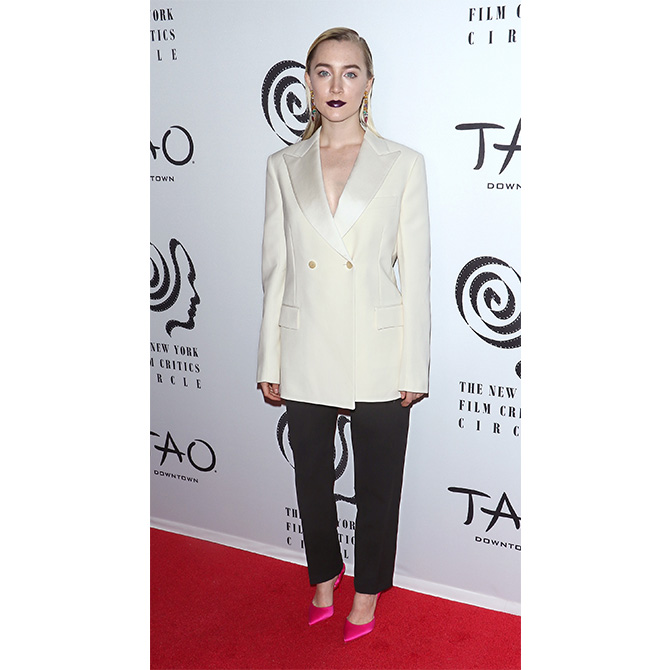 #4 She was one of the first celebrities to confirm on wearing black to the momentous Golden Globes 2018. 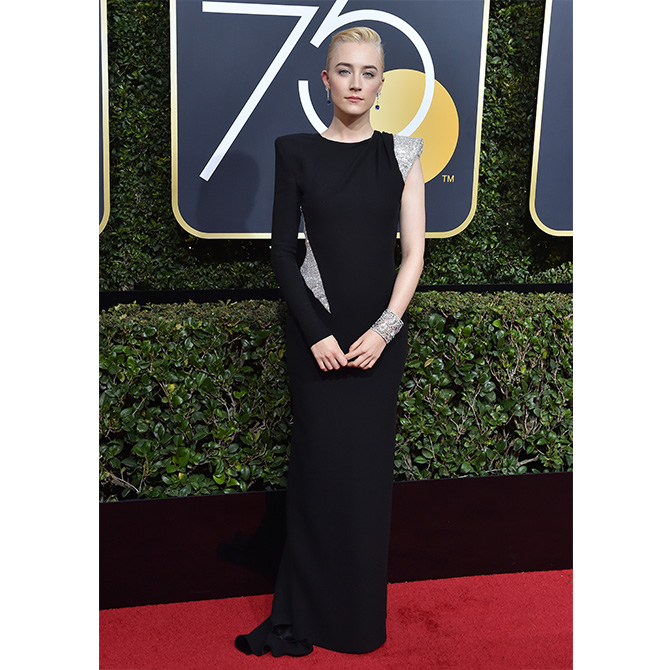 In light of the #MeToo movement, the stars that graced the red carpet chose to wear black in solidarity of the sexual misconduct prevalent in Hollywood. The young Irish actress chose to wear a powerful one-shouldered Atelier Versace gown to mark the historical occasion.

#5 She knows what works with her skin tone 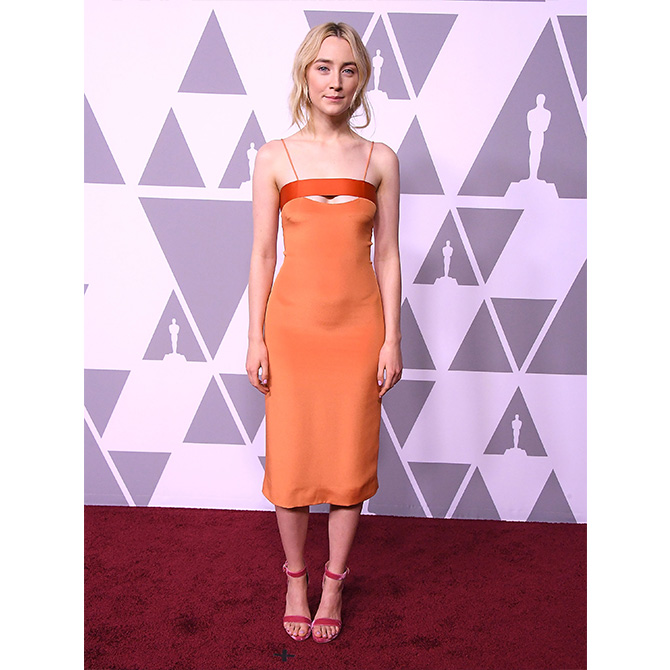 #6 She is willing to walk on the dark side At the British Academy FIlm Awards 2018, Saoirse wore one of the standout looks from Chanel Pre-Fall 2017. It was a long-sleeved feathered gown that was high on the neck but sheer at the hemline, va va voom!

#7 She's not afraid to experiment with colour 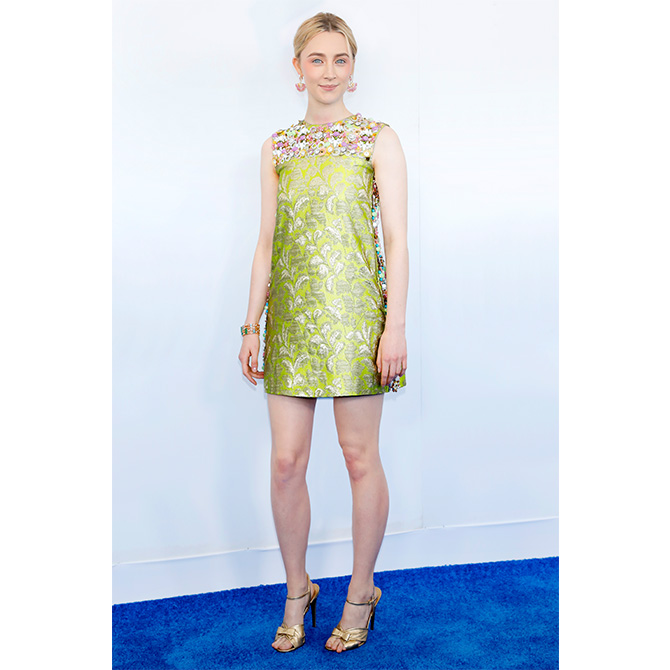 It's established that tangerine and hot pink is her go-to, but it's refreshing to see her in a hue on the opposite side of the colour spectrum. She makes a good case for lime green in this 1960's inspired brocade mini dress by Prada.

#8 She's not afraid of volume either A silk taffeta dress with ruffled shoulders sounds overwhelming but the Irish actress wears it like a pro with her hair up and simple makeup to balance the weight of the dress.

#9 But she also knows how to dial it down 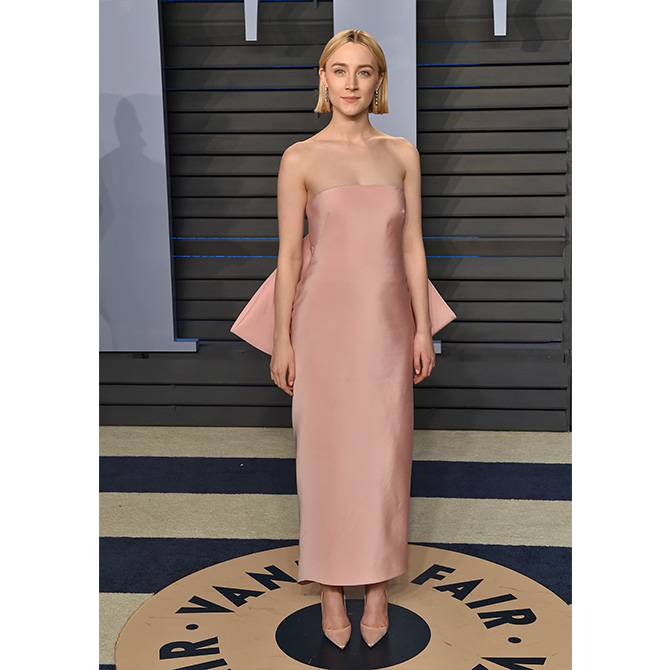 One of my favourite looks from her to date. The pink bow-trimmed gown designed by Raf Simons for Calvin Klein by Appointment complemented the bluntness of her bob. The sheer simplicity of this ensemble is key, her neck kept bare and the only jewellery seen were a pair of diamond earrings by Cartier.

#10 She plays into the theme of her films 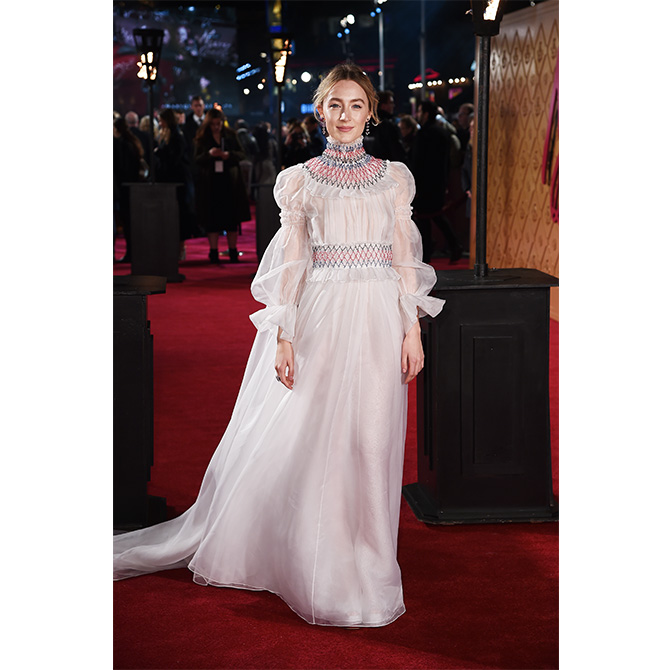 At the European Mary Queen of Scots premiere, the young actress donned a billowy tulle dress by Carolina Herrera, embellished with statement balloon sleeves. The Edwardian collar and conservative nature of the dress befits the era of her latest film set in the 1500s. 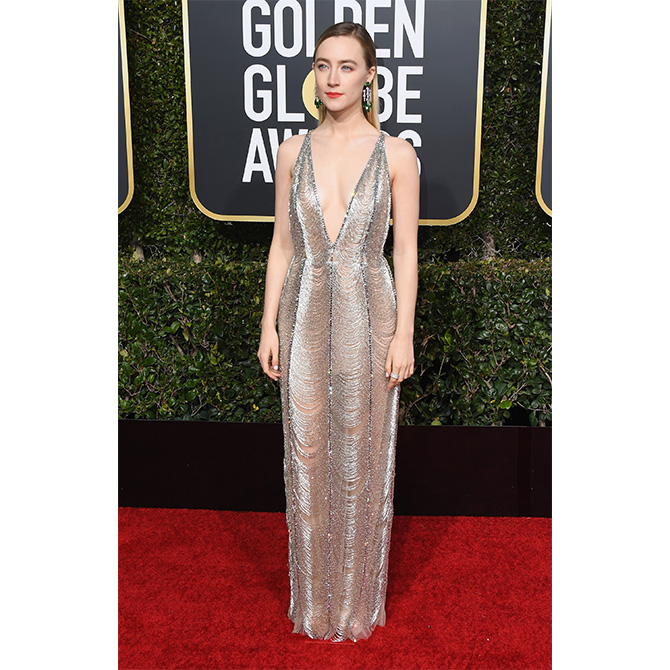 At the Golden Globes 2019, Saoirse stunned in a 1920's esque plunging, sheer glittery gown by Gucci and paired it with diamond and emerald earrings by Chopard for ultimate old Hollywood glamour.

How to: Party-at-the-back hairdos spotted at the #GoldenGlobes2018