Back in September last year, Michael B. Jordan was announced as the new global face of Coach and also its first menswear ambassador. Since then, the Black Panther actor and producer has starred in some of the brand's seasonal ad campaigns and now, there's a new capsule collection marking Michael's first foray into fashion design: the Coach x Michael B. Jordan line.

Below, everything you need to know about this creative collab that's also a unisex ready-to-wear collection. 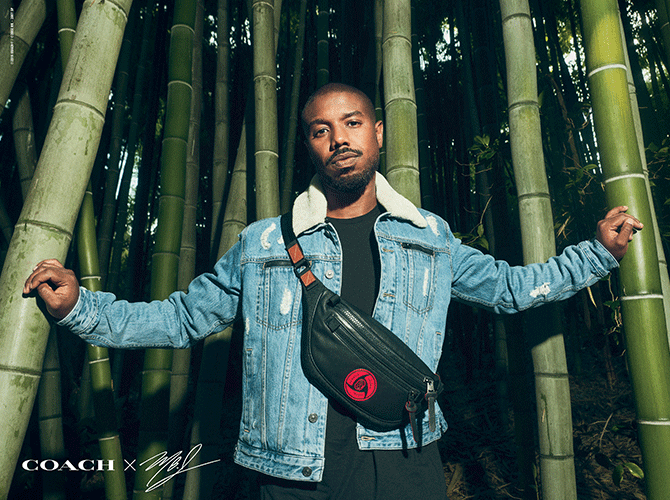 Never thought you'd see Naruto-inspired logos on clothes by Coach? Now you will. That's because the backstory of the popular Japanese anime and manga really resonates with Michael. In the series, Naruto is a young ninja who starts out as an outsider but eventually earns the respect of his community by protecting it. This mirrors Michael's own narrative IRL as he too, is building bridges inside and outside of Hollywood; to top that off, this initiative simultaneously echoes Coach's commitment to community and courage.

Besides that, other inspiration is drawn from Michael's cultural influences, his community and his passion for bringing unique voices to the forefront. Along with the expertise and guidance of Coach Creative Director Stuart Vevers, this capsule collection marries the brand's values and craftsmanship with Michael's love for functional fashion plus Naruto's graphic elements. PS: It's Naruto's 20th anniversary this year!

According to Stuart Vevers, Michael put his heart and soul into this collection and the photographs definitely speak for itself. Speaking about the collab, Michael said, "With my name on this collection, it was important to design pieces that represent my cultural influences and my community; pieces that I could see my friends, family and fans wearing with pride."

Overall, the unisex collection—comprising apparel, footwear and bags—exudes a utilitarian flair that serves both form and function, just the way Michael likes it. From parkas, pullovers, graphic tees and denim jackets with shearling collars (don't miss the Naruto embroidery at the back) as well as backpacks, utility packs and hybrid sneaker-boots, silhouettes are comfy and roomy where needed while infusing technical details like tactical straps, elastic closures and removable sleeves.

Of course, Naruto's graphic codes and mystic iconography are peppered throughout the collection and its iconic eye motif is reimagined through Coach's retro C logo. View the entire collection, below:

Psst... to celebrate this special collab, there will also be global pop-ups and the one in KL is happening from 7th to 20th October 2019 on the third floor of Pavilion KL! Keep your eyes peeled for what the store façade and indoor pop-up will look like, below: