1. Paul Andrew had a fast rise at Salvatore Ferragamo. First started out as a shoe designer, he joined the Italian fashion house in 2016 as its women's footwear director, before being promoted to the women's creative director a year later. Two days ahead of its Autumn/Winter 2019 show, the brand announced that the 40-year-old designer is now taking the helm as the creative director for the entire label. In an interview with WWD, Ferragamo's chief executive officer Micaela Le Divelec Lemmi says. "Paul is the natural creative leader of the Salvatore Ferragamo house as we enter a new phase of evolution and growth. I am confident in his vision as we powerfully connect the complementary forces of our heritage, our unwavering commitment to innovation and Italian craftsmanship, and our relentless dedication to our customers." Its menswear design director, Guillaume Meilland will continue his role while assuming additional responsibility as the studio director. 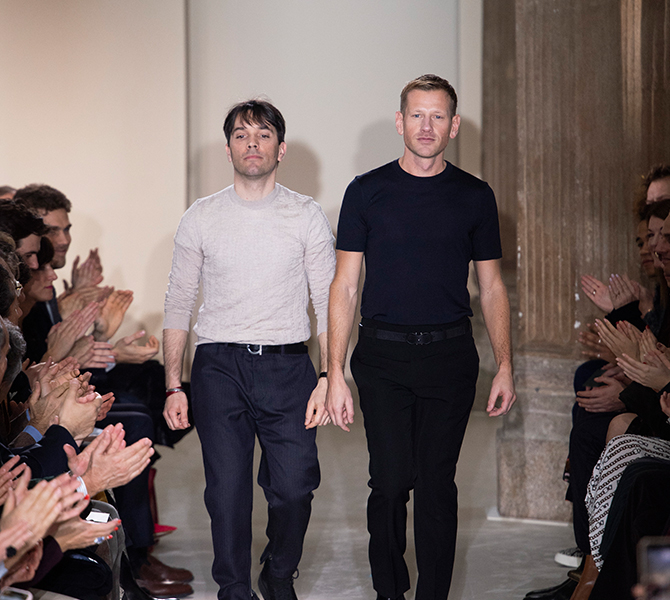 2. Calling all Stranger Things fans: You're in for a treat. The stars of the popular series and real-life couple, Natalie Dyer and Charlie Heaton were seated front and centre at the show, alongside its co-star Joe Keery who was also present with his girlfriend, Maika Monroe. Other celebrities include our very own Neelofa, who was dressed impeccably in a leather-suede look, Suki Waterhouse, Kate Moss's sister Lottie Moss, Michelle Monaghan and Taiwanese actress Ning Chang. It was one of the most star-studded shows during Milan Fashion Week this season, for sure.

3. Entitled "Generation", the show notes state that "Family, the cultural continuity between generations, and power-all have been central to the spirit of Salvatore Ferragamo." And to fully translate it onto the runway, the brand casted multigenerational models including Liisa Winkler, Maggie Rizer and Alek Wek in its model line-up. It-girls Kaia Gerber, Selena Forrest, and Sora Choi were spotted on the runway too.

4. Of course, for someone who was previously a shoe designer, you can expect Paul Andrew to place a huge focus on the footwear, and this season, he worked on the collection using the toe-to-head formula. The designer dug deep into the archives and looked to styles from the '30s, '40s, and '60s. In particular, the suede patchwork wedge from the former era inspired the patchworks of suede, nappa, snake, and lizard in the collection, and hints of stripes were influenced by wedges in the same print from the Forties. Salvatore Ferragamo's newly launched Gancini motif also made a small appearance on a bag and boots, worn by models Rianne von Rompaey and Kaia Gerber. Clothing-wise, the highlight was definitely on its supple leather pieces in various hues that gave that extra hint of shine, whether it's in the form of a slip dress, coat or a jumpsuit. The few leather bomber jackets, in particular, were some of the standout pieces. Paul Andrew did a great job with the colour palette—rich brown and maroon tones clashed with candy hues and pretty greens in the prettiest way possible.