15/12/29 17:30
With the on-going holiday season and new year up ahead, there are bound to be plenty of parties to celebrate the end of the year. So let’s make it fun for everybody

Loud parties in clubs and bars aren't exactly the most conducive environments for upholding good behaviour, if anything. But as long as there are many, many people stuffed into one room with limited space, there sure needs to be some unspoken rules to follow to make sure the night goes smoothly.

Many would probably disagree with this, but I envy our Singaporean neighbours when it comes to their policies on smoking indoors. With their nightclubs and bars kept vape-free and cigarette smoke-free, these establishments have to resort to smoke machines to induce your club-worthy atmosphere, which is pretty hilarious if you think about it. Hilarious... but at least you can breathe.

Smokers may get the butt of many an etiquette slap on the wrist, but it's not without reason. And since many Malaysian establishments allow smoking indoors, it's only understandable that smokers wouldn't take the trouble to go outside to light up. So if you're going to do it inside, just be a little courteous. It's safe to say that many ridiculous club fights spark from a cigarette burn to an arm or two.

If you're smoking in a crowded space, blow your smoke up and away from others (to avoid blowing it into someone's face, because that's just really rude), and keep your cigarette butt close to an ashtray. Avoid flinging your cigarette around so that you don't accidentally sear someone, or so that your ashes don't fly into the drinks that you and your friends are probably going to consume.

Patience is a virtue

As I mentioned, many fights begin with the unfortunate brush with a butt of a cigarette. But it can really begin with just about any brush, really. Nightclubs and popular bars are crowded with people who may or may not be intoxicated, especially on occasions like New Years. You are bound to get stepped on or shoved, once in awhile (heck, I know of unfortunate people who have been vomited on, bless their poor scarred souls). It happens.

The best way to avoid conflict is to just let it go - even if the other person didn't apologise. It's most likely they didn't realise what they did, or if you confront them and they happen to be a person with alcohol-induced (or social-induced) anger issues, they may just take this confrontation as an invitation to get aggressive. If you're the one at fault, just say the most honest sorry you can muster, and move along. 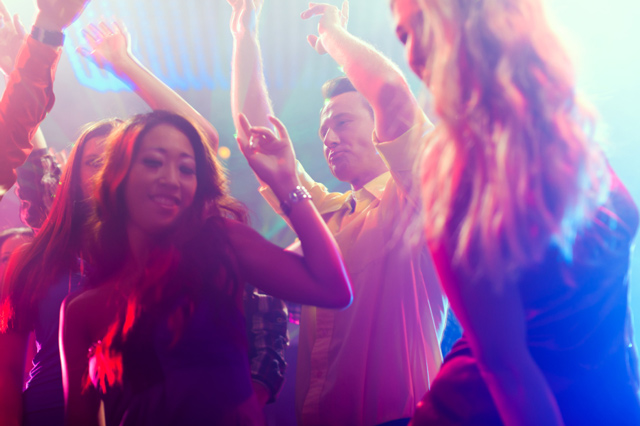 It's still a thing here apparently, and it even happens with working adults. You've probably seen it, experienced it, or have been a part of it at some point in your partying life. You see a group of guys at the bar, and a group of ladies dancing on the dance floor, most likely in an inward-facing circle. The group of guys swoop into the dance floor and start awkwardly dancing behind the ladies, outside their circle, trying to get their attention - and it some of the guys are daring enough, they may even resort to some grinding.

The girls finally take notice, glance at each other, roll their eyes, and within minutes - or seconds - they've shuffled away, back to their table, leaving the group of guys on the dance floor dry-humping the air. I've never understood why some men think that this approach works with the ladies (or vice versa, in some cases). Unless one of the girls has been eyeing you prior to hitting the dance floor, chances are you're going to come off rather creepy with this move.

To the person who does this, it may give you a burst of confidence for a glorious minute or two; to the unsuspecting ladies, they'd likely avoid this man for the rest of the evening; but to us observers, that would have probably been the saddest thing we'd seen all year.

Dressing for the occasion

This is the best advice I've ever read: Dress in something that is easy to clean, easy to move around in, and isn't easily damaged. Wherever there are alcoholic (or other) substances involved, people around you are bound to get a little rowdy. An expensive silk dress may not be the best companion to a crowded place where someone - or perhaps even yourself - may spill wine or ice on you.

Also wear shoes that allow you to trudge through spilled water and stairs, and of course, allow you to stand and dance comfortably the entire night. Don't wear clothing that limits your movement. Most importantly, wear decent and nice underwear should you be wearing a dress and find yourself on the ground some time during the night, for whatever reason. Oftentimes, popular clubs get so crowded that reaching the bar is like finding an oasis in the middle of a scorching desert, but having fought off hundreds of dancing madmen to get to it. So it's understandable that the urge to occupy that sweet, golden spot would be strong. But it's also rather sad for the rest of your peers who are going through that uphill struggle to get their fill of drinks for the night.

It's mostly an unspoken rule here, but don't loiter around the bar once you get there; let other people get their drinks and have a good time too. If there's really nowhere else to go, make way when you see someone trying to get through to order a drink. You wouldn't want to be in that person's situation, so be courteous.

The five questions thou shalt not ask at a Christmas gathering

The essential guide for attending a Christmas service

Table manners for the modern-day diner