If you've been to APW in Bangsar, then you might have seen Jun Ong's work—especially after the sun sets, when 'Bolt', the interactive light sculpture above the terraced red stage comes to life. Fun fact 1: before 'Bolt' found a permanent home in APW, it made its debut at iLight Marina Bay 2016, Asia's leading sustainable light festival. Fun fact 2: Jun actually had a hand in designing the space where the work currently stands. The public spaces down the side and front of APW, dubbed pocket parks, were conceptualised by POW Ideas, an architecture and design studio co-founded by Jun together with fellow architect Kyle E. 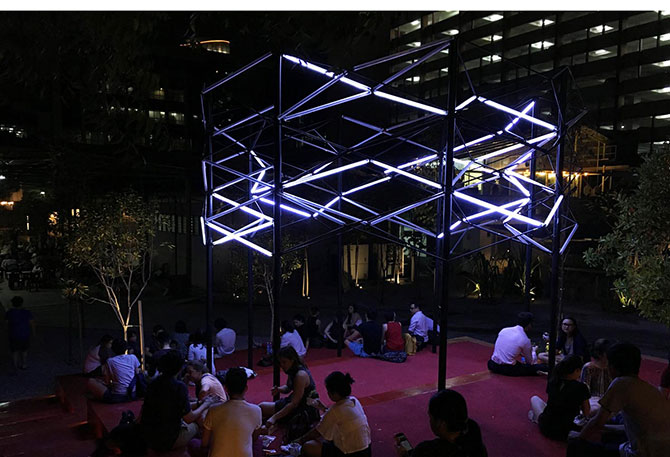 POW Ideas is also the creative mastermind behind the beautiful spaces of local businesses such as Merchant's Lane, The Swimming Club in Journal Hotel, and a handful of establishments at APW, where the studio is based.

Compelling work rarely slips under the radar of the discerning art community, thus it comes as no surprise that Jun's light art resume spans from in-store displays for Gucci to international art fair commission pieces. His installations are usually marked by spatial awareness and the coupling of low-tech materials with hi-tech application, translating into stark LED light fittings in structural forms tailor-made to its surroundings—a telling attribute of the multidisciplinary artist's background in architecture. Below, we caught up with the man himself for an insight into his creative process as well as upcoming works in the year ahead: 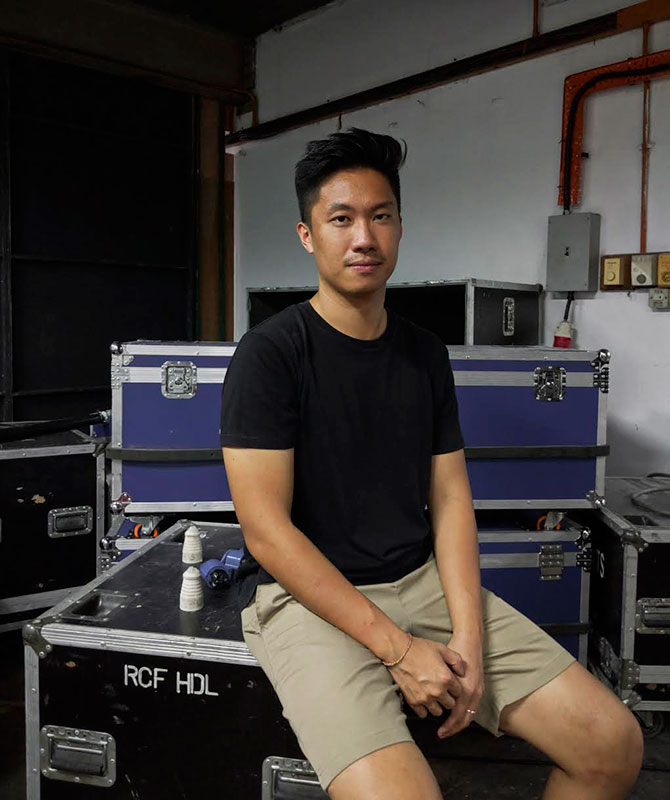 What sparked your interest to work with light?

"I always had a strong interest in arts since young, but decided to pursue architecture instead. However, things came full circle when I did my final thesis on Picasso's sculpture making methods. For me, my first exposure with lights was at the Tate Modern, seeing Dan Flavin's fluorescent tubes for the first time. I was intrigued by the way a household object could be perceived so differently and also project an inherent intangible quality about artificial illumination. I also had a short stint at the studio of British light designer, Tom Dixon in London."

We understand that you do mostly commission pieces, but going back—how did your very first light art come about?

"It was a very special piece commissioned by KLPAC for their 10th year anniversary in 2015. Entitled 'Awan', the piece went through lots of trial and error, and it was built to fit into my jeep with a group of friends. It was also me calling up Philips Lighting Malaysia and randomly asking them to sponsor Led tubes for the artwork. It then led to a few more collaborations with Philips."

Is there usually a message behind your creations?

"I'd like to think that my work evolve over time and also place. For me, I'd like to keep my work as abstract as possible but it usually negotiates between structure and technology. I want my audience to look at how artificial lighting can impact its surrounding context and how it can be interactive using technology."

Your work spans from large outdoor installations that incorporates its surroundings, to more intimate, standalone indoor pieces. Does your creative process differ from project to project?

"I always start with sketches and understanding the context regardless of the scale of project. I do develop ideas over time and will sometimes apply them to suitable commissions. Obviously indoor and outdoor works have different technicalities eg waterproofing etc."

If you had to choose, which project has given you the greatest satisfaction thus far?

"For me it has to be 'Star' in Butterworth, Penang." 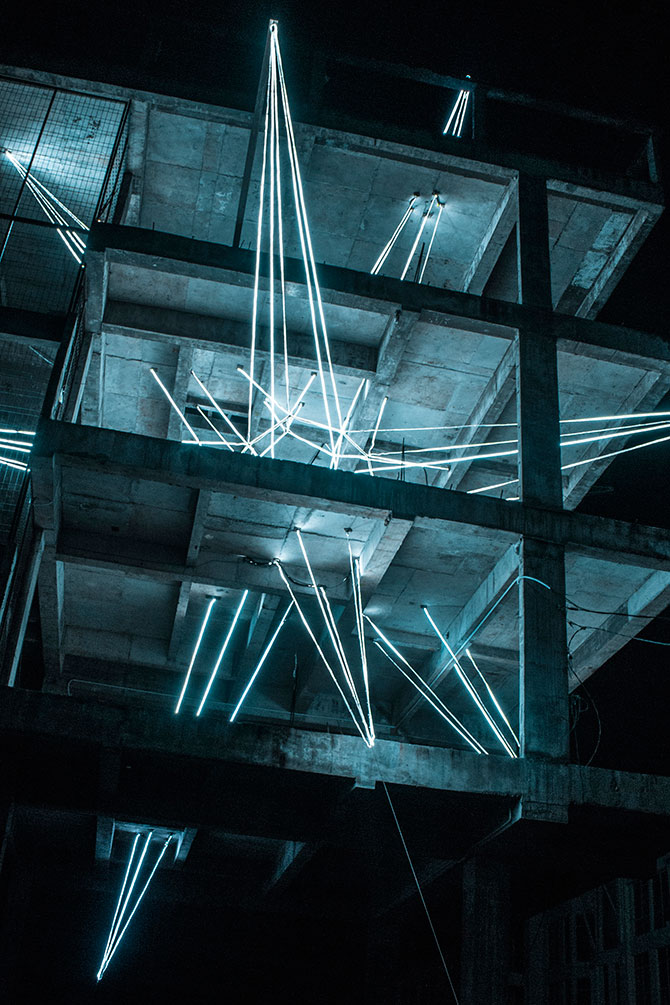 Any upcoming projects we can look forward to?

"This year I am working on some small pieces, potentially flat pieces that hopefully will lead up to a solo exhibition soon."

Moving on to POW Ideas, tell us more about it and what sets it apart from other creative agencies.

"We are an architecture and design studio. It was started by myself and my partner, Kyle E who has a strong interest in landscape architecture. Together we do mostly small-scale architecture projects, interiors, product design and also art installations. We have worked on projects ranging from a spa, a hair salon to a bamboo sculpture in Johor. For me, it's also a good avenue to experiment with lighting ideas in more spatial projects."

The pow-wow sessions last year were really a great initiative and platform for local creatives to both share and learn from each other. Will that make a comeback this year?

"We are working on a something different for pow-wow this year, potentially bigger scale. We can't disclose much yet but we are hoping that our one year experience last year will culminate to an impactful event this year, bringing in local and international creatives."

What is your take on the current state of the local creative scene? Is there anything you would like to see being done differently?

"I'm an optimist. I think our scene is not as bad what most perceive. For me, its exciting albeit raw and young. We are still referencing a lot of ideas we see overseas but if the concept of Shanzhai (editor's note: Shanzhai refers to the copycat culture in the mass production industries in China) works for Shenzhen, hopefully this process of referencing will eventually blossom into something unique and special for Malaysia."

Last but not least, what's next for you? Any goals or resolutions for the year ahead?

"I hope to take on more international projects this year and to also learn and collaborate with more creatives."

Check out more of Jun Ong's work on his website and POW Ideas.

The crystal artist who puts a magical touch on everyday subjects